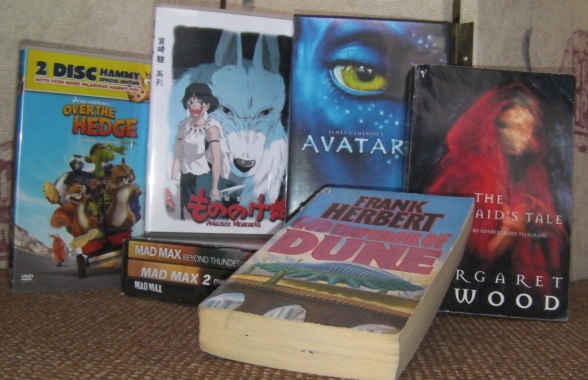 Dying Earth* is a very emotional subgenre for me – though, the story itself may be written as overtly devoid of emotion. As the name suggests, Earth is no longer the lushly green planet we know. Because of some sort of catastrophe, be it a literally earth shattering war, the Earth getting hit by a massive meteor, humans simply using up the Earth’s natural resources or a myriad of other apocalyptic events, nature is destroyed (or very nearly destroyed).

Stories may take place on Earth itself or on another planet, because earth is now dead or dying. The main focus may be on the fact that Earth can no longer sustain life (or in the very near future) or it may be a background detail.

This is a flavour that pulls at the heart strings of every tree hugger or nature lover out there.  Being one of these individuals, I can honestly say that this genre is in one breath demotivational, heart wrenching, beautiful and very inspiring. Avatar, the movie with the large blue cat people, makes me want to recycle my neighbour’s trash as well, blat polluters over the head and become an amazon every time I watch it.

*Note that the planet in question is not necessarily Earth, it may be another planet or moon…or whatever the people of the story call home.

Science Fantasy is any form of fantasy that does not exclude technology as a whole. This means that it can be set in almost any time period (meaning, the setting can appear to be mostly mediaeval like Melanie Rawn’s The Ruins of Ambrai or it can be in a futuristic setting like Frank Herbert’s Dune). There are two main subgenres under this banner: Other Planet (this post) and Dying Earth (next post).

In Other Planet stories, the story takes place on another planet and may or may not include in-your-face technological advances. I originally thought I wasn’t entirely sure that I’ve encountered this kind of fiction, but, as I sat down to think about it, I realised that I have books by different authors and even some movies on DvD that are set on other planets – but are still fantasy.

To be fair, the Dying Earth stories often spill over into Other Planet stories. So, these two subgenres are really not typically used in exclusion of each other.

In a purely Other Planet setting, humans have typically ventured into space and have started colonising other planets, though humans may have been forcibly taken to the other planet(s) by alien races. Humans may or may not be taking colonisation overboard. There may or may not be other races/alien races. In some stories, the fact that it is a planet other than earth hardly ever come up as a theme. In others, the fact that Earth is the original planet the humans come from is part of the normal facts and it is often referenced.

Examples of Other Planet in literature include:

And in the movies: